British Tea Culture, we all know it exists, we all know it’s important, but what exactly does it mean? I set out to figure this out by interviewing over 110 people from the United Kingdom about their tea habits. I wanted to see what makes their tea culture unique across all social classes. I deliberately did not ask tea connoisseurs, for we know that the “connoisseur crowd” is a common stripe among all tea cultures.

Assumptions made: British Tea is a black tea, mostly a blended black tea. Teas blends are commonly made up of teas from India (Assam), Sri Lanka, or East Africa.

The following is a tag cloud of words that I gathered from asking the question “what does tea mean to you?”: 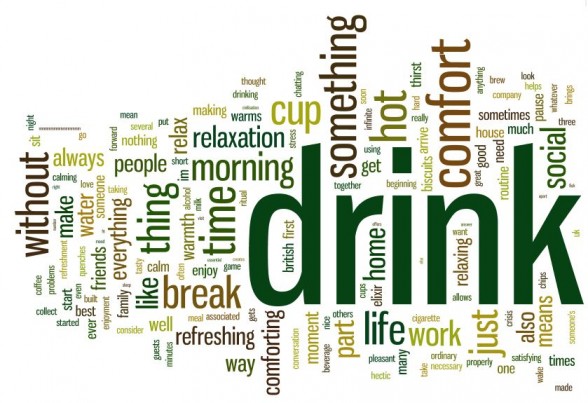 “If the day is a sentence, tea for me is the punctuation.” – Andy Callaghan

Hearing a lot about how tea is considered a small meal or a time of the day in Britain, I asked the respondents whether tea was a time of the day, a meal, or supper. I realized later on that it was probably a mistake to ask if tea was a beverage as well, as most responses included this as an answer. It was possible to choose more than one answer.

When asked what food is most likely to accompany tea:

The term “biscuit” is used a bit differently in the UK than in America. Typically, rich tea biscuits, digestives or hobnobs are consumed with tea. They are a hard biscuit that can be dipped in tea.

Tea bags seem to be a favorite with 71% preferring them as opposed to 13% loose and 15% other (whatever that means). Of those that answered loose, steeping methods ranged from the most common answer “strain the tea once steeped” to “use of a filter while steeping.”

When asked whether they steep tea directly in a tea cup or mug or in a tea pot, I was surprised at how few people use tea pots:

12% use something other than tea pots or cups/mugs

I’ve read about the use of brown teapots called “brown betty” teapots, the interwebs seem to think that these are widespread throughout the UK, however only 17% of respondents had actually heard of them and 6% actually owned one.

Most remember drinking tea as a child, in fact:

The average age that Brits remember drinking tea is 9

9% of respondents could not remember the age at which they begun drinking tea but answered “for as long as I can remember.”

Now we move into touchy territory, preparation preferences. I asked “how do you take your tea” and gave four options: with milk, with sugar, with milk and sugar, and other. Here are the results:

Another personal preference that has sparked many a debate is what to add first, milk or sugar.

The next section of the survey dealt with “builder’s tea” something that garnered some “colorful” responses. “Builder’s Tea” is a name given to what some describe as a “working man’s tea” – a very strong  brew with copious amounts of milk and sugar in it.

Here are some of the answers I received when I asked “what does builder’s tea mean to you?”:

Back to tea-ware, I wanted to find out what most people owned as far as tea implements go. One thing I quickly learned was that nearly everyone uses electric kettles in the UK and boiling water on the stove is rarely done. I even found this amusing post about the predictable surge in electricity demand that the power infrastructure must deal with each day. Here is a tag cloud gathered from responses to the question: “Do you own a kettle, a tea pot, and teacups? Tell me about your teaware:” 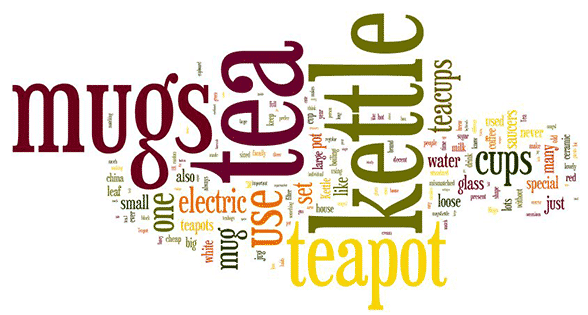 When asked what their favorite brand was, respondents gave a wide variety, but the most common brands were Twinings, Yorkshire, PG Tips and Tetley. Here are the results:

Freshly boiled water is poured from the electric kettle into a mug over a tea bag. After several minutes, the tea bag is removed and milk is added and sometimes sugar. Actually, be right back, I think I’ll have a cuppa. 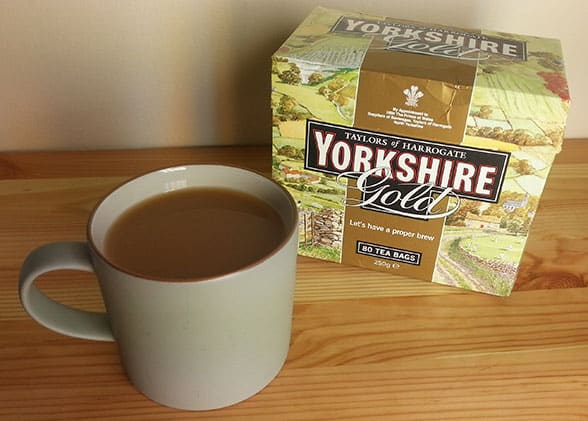 Interestingly enough, Royal Society of Chemistry has put out a release entitled: “How to  make a Perfect Cup of Tea” check it out for a more detailed guide to making tea.

Many thanks to the friends I met in my travels that helped me with this post and to the wonderful people of r/askuk. Any questions or comments? Feel free to leave a message in the comments below.