A Visit to the BOH Tea Plantation in Malaysia

A Visit to the BOH Tea Plantation in Malaysia 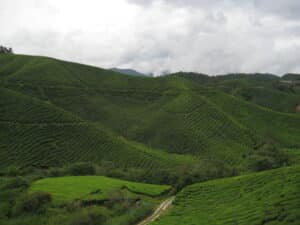 In July 2008, I was backpacking through Malaysia and was able to visit the largest tea plantation in Southeast Asia-the BOH tea plantation. It was a great experience. If you find yourself in the Cameron Highlands of Malaysia, be sure to visit a tea plantation. There were rows and rows of tea plants as far as the eye could see. I took a tour of the processing plant and was able to see their process. Their process was described to us as we walked through the factory; they broke it down into each stage: plucking, withering, rolling, fermentation (oxidation), drying and sorting. This was what they had to say:

Plucking
Two years after planting, the leaf is ready for plucking, which takes place every three weeks. After plucking, the leaf is checked for quality and weighed. It is then transported to the factory where it goes through five main processing stages. Each stage is vital to bring out the distinctive fragrance and aroma of our teas.

Withering
The green leaf is first withered to reduce its moisture and to allow natural chemical reactions to take place. This process takes between 12 – 20 hours and is usually done overnight.

Rolling
The rollers used at this factory date back to 1935. These machines twist and break withered leaf, distorting and rupturing its internal cells. Liberating and exposing the juices for fermentation.

Fermentation
Fermentation, or more accurately oxidation, is a natural chemical process in which enzymes in the leaf are exposed to oxygen. Traditionally, the broken leaf is spread onto trays. Before fermentation, the leaves are green in color but by the end, they turn a coppery color. This critical stage of manufacturing usually takes about 2-3 hours, during which the characteristic flavor and aroma develop.

Drying
The fermented leaf is fed into machines through which hot air is passed at temperatures nearing 100 degrees Celsius.  This halts the fermentation, reduces the moisture content to less than 3% and crystallizes the juices. This converts the leaf into its familiar crisp black form. The drying process is completed in approximately twenty minutes. To produce the hot air the furnace uses wood from rubber trees.

Sorting
After drying, the made tea is graded according to particle size by passing it through a series of vibrating sieves. Stalks and fibers are also extracted during this stage. Each grade of tea has its own density and flavor characteristics.

Enjoying
After the tour, I made a stop at the BOH tea shop which sells packages of all of their teas, as well as prepared tea to enjoy on the veranda overlooking the entire plantation. It was amazing to see the production of tea on such a large scale at BOH, a company I have never heard of until I had arrived in Malaysia. 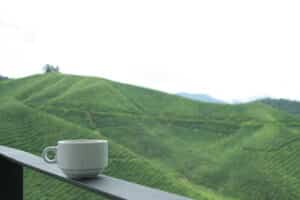 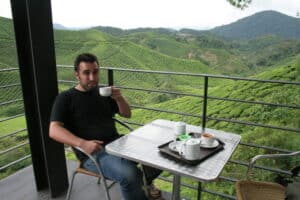 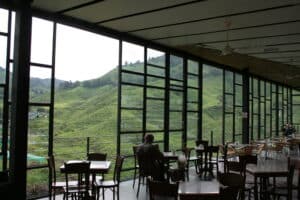 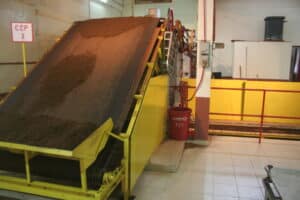 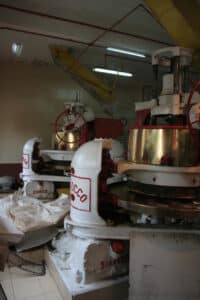 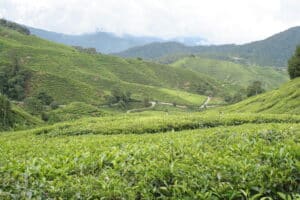