Nai Xiang, literally “milk fragrance” is a characteristic of a Taiwanese high-mountain oolong made with the Jin Xuan cultivar of camellia sinensis. Jin Xuan is known not only for it’s milk-like mouth-feel, but also for it’s cream like flavor and aroma.

Many so-called “milk oolongs” have popped up on the market having been artificially flavored. In 2010, Roy Fong, owner of the Imperial Tea Court traveled to Taiwan and  discovered several variants of it’s production. From what he discovered, I am seeing three different things all being called “milk oolong” in order of legitimacy:

Roy was able to see the home-brew fertilizer being made and described it as a “solution of egg, milk powder, soy bean meal, fish meal, honey, and yogurt that they fermented and used as liquid fertilizer.” Here are some photos that he shot: 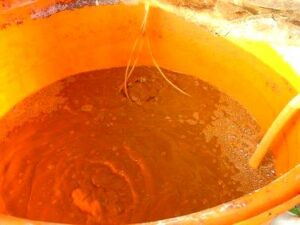 So how do you tell if you have a true milk oolong? I think that if you have experienced one with an overwhelming aroma and flavor, it was likely artificially flavored. Another way to spot artificial flavors in tea is to note if the flavors last from steeping to steeping or if they diminish after one steeping.