The Results are In: 2017 Tea Masters Cup Finals

The Results are In: 2017 Tea Masters Cup Finals

The 2017 Tea Master’s Cup Finals took place September 25-27 in Enshi, Hubei China. 29 participants from 13 countries competed in 4 categories: Tea Preparation, Tea Pairing, Tea Mixology and Tea Tasting. The competition took place within the 7th International Tea Forum run by the CFNA (China Chamber of Commerce for Import/Export of Foodstuffs, Native Produce and Animal By-products). The finals were judged by a panel of tea experts from around the world: Denis Shumakov from Russia, Tony Gebely (yours truly) from the USA, He Jie from China, Sharyn Johnston from Australia, Gabriella Lombardi from Italy, William Lee from Korea and Nguyen Thi Anh Hong from Vietnam. The competitors that participated in the finals had previously won national competitions in their home countries. Tea Master’s Cup is truly at the forefront of innovation in the tea industry. No other organization brings together this number and caliber of tea professionals from such a wide range of cultures and experience.

The tea preparation category was made up of two parts, each judged in the same manner. In the first part, the tea master had to choose a tea to prepare from a selection of 3 teas provided by the judges and prepare that tea using provided tea ware. In the second part, the tea masters prepared their own tea using their own tea ware. The tea preparation category was judged on brewing and serving technique, presentation aroma, taste, and aftertaste. 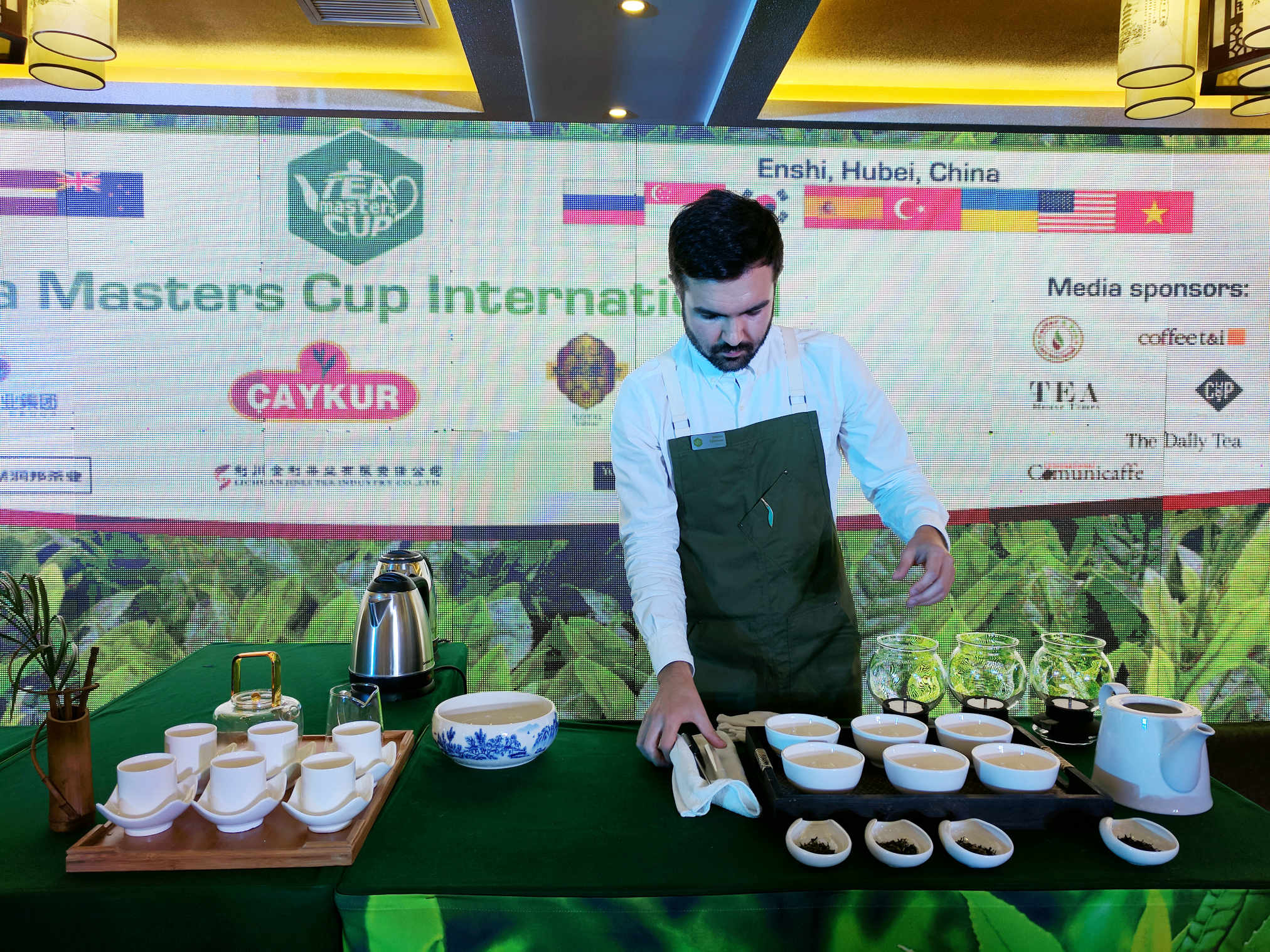 The winner of the tea preparation category was Dmitriy Filimonov, leader of the tea department in the GoodWine company in Ukraine.  Dmitriy prepared a 2017 First Flush Darjeeling tea from Goomtee Estate using a preparation method he called “differential extraction.” He described differential extraction as a method he invented to control the taste of the head, the body, and the tail of the tea. For this, he used 3 Hario Globes stacked on top of one another, each contained some dry tea leaves. He poured hot water into the top globe, allowed it to steep for a time, then released it into the second globe and then the third globe. Finally, the resulting infusion was released into a tea pot below the stacked globes.

The tea pairing category was also made up of two parts, each judged in the same manner. In the first part, tea masters were given a selection of local ingredients and 3 local teas. The master must derive a food pairing using the provided ingredients. In the second part, the tea master could bring his or her own ingredients and tea to prepare a pairing. The tea pairing category was judged on neatness and cleanliness, appeal, presentation, taste and potential. 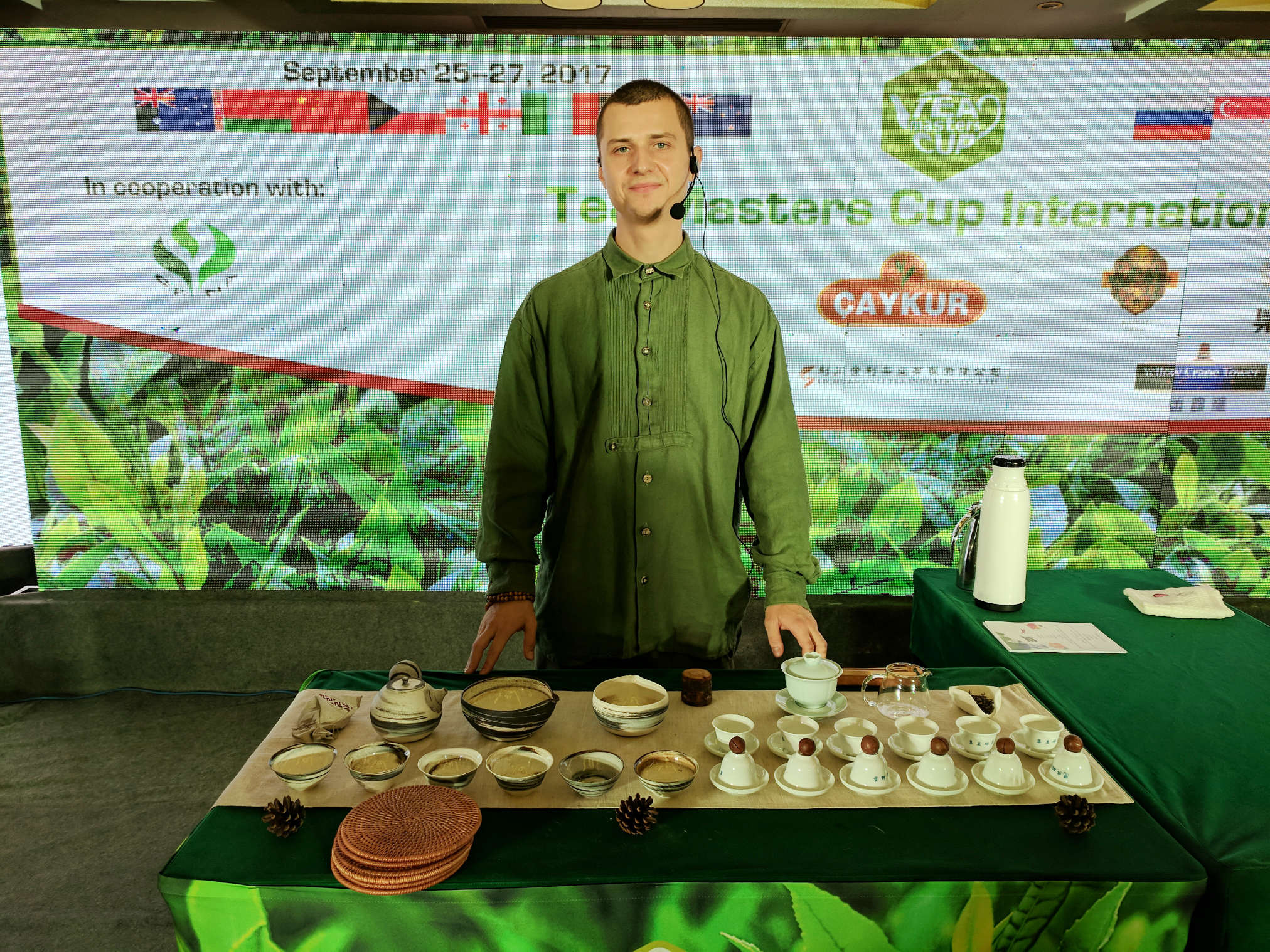 Andrei Ivanov of Latvia readies for his Tea Pairing performance

The winner of the tea pairing category was Andrei Ivanov from Latvia who paired a 2008 Menghai with Mandarin Orange topped with a slice of fresh ginger and fresh chili pepper and drizzled with honey. There was also a stone that had been scented with pine oil. Andrei wanted to hit on notes that were bitter, sour, salty, sweet and spicy. The pairing was elegantly displayed on a clay slab. The tea ware he used was made of the same clay, made in Korean Style by a Latvian artist. Andrei talked us through his pairing and evoked images of a Latvian forest and the Baltic Sea. 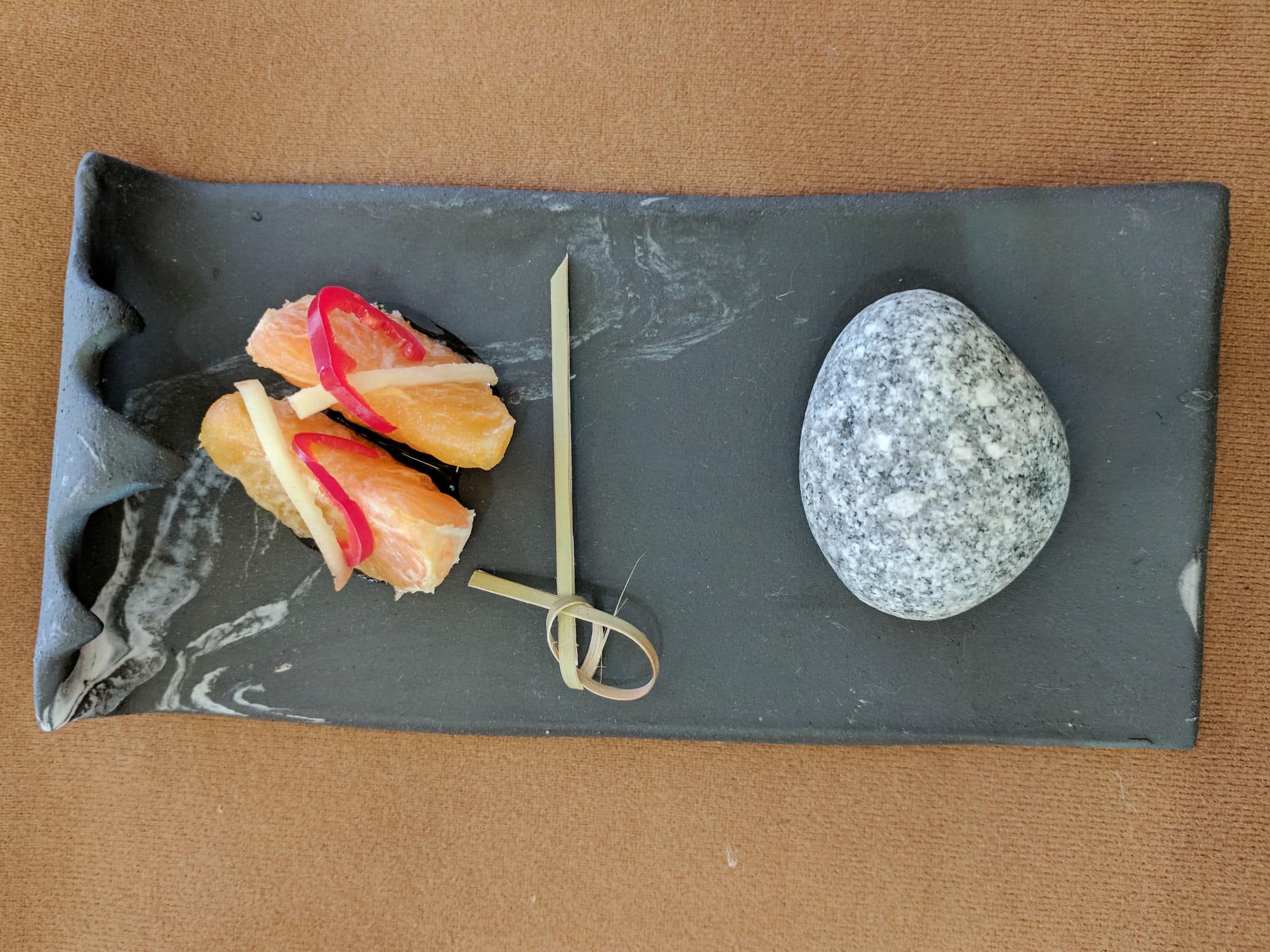 The tea mixology category was also made up of two parts, each judged in the same manner. In the first part, tea masters were given a selection of ingredients and had to prepare a mixed beverage from the ingredients and a tea of their choice. In the second part, the tea master could bring his or her own ingredients and tea to prepare a mixed beverage. The tea mixology category was judged on preparation and presentation technique, appeal, presentation, organoleptic qualities, tea synergy, and potential. 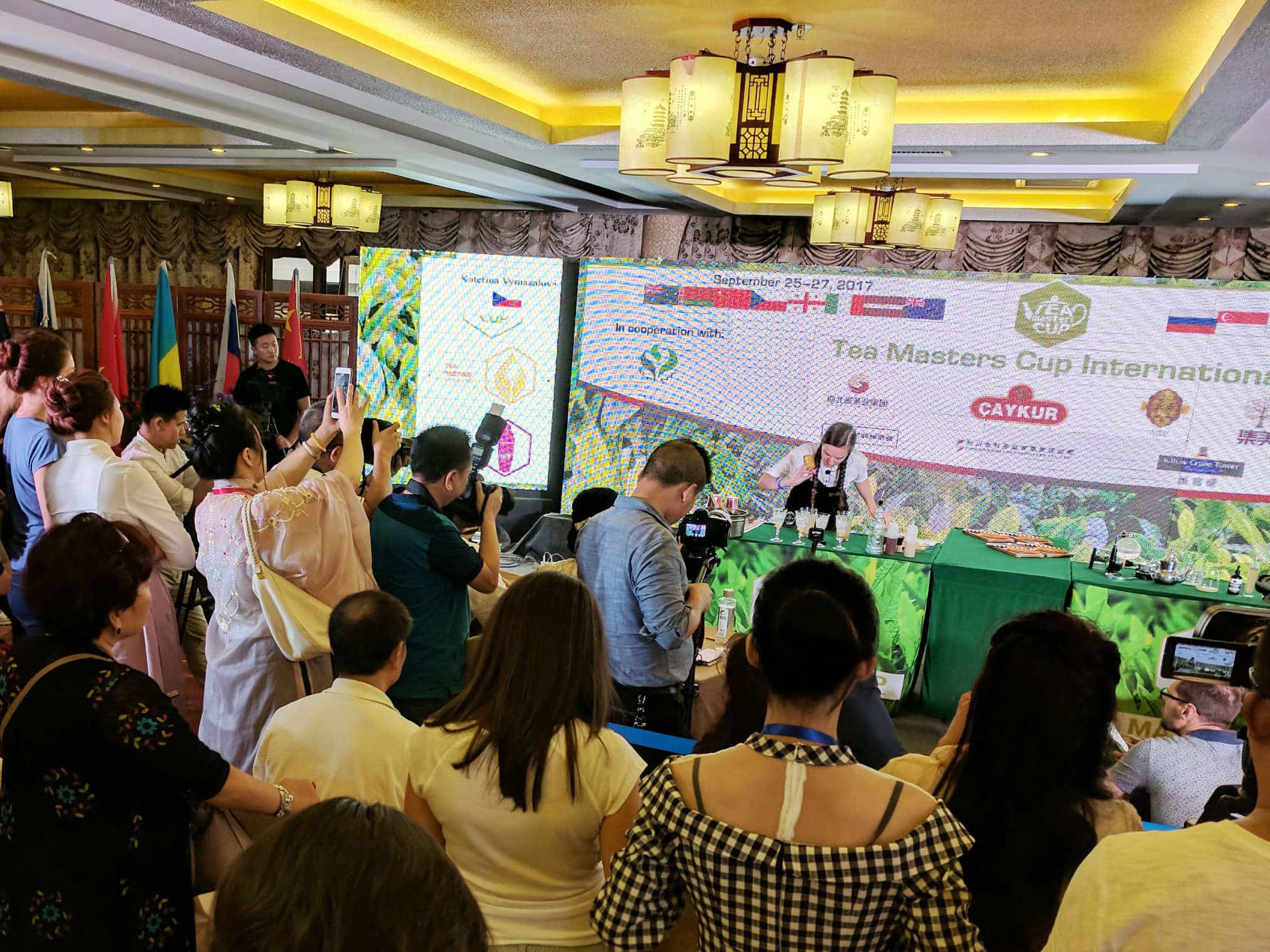 The winner of the Tea Mixology category was Katerina Vymazalova of the Czech Republic. Using provided ingredients along with some of her own, Katerina prepared a beverage made from Sencha, banana puree, lemon juice, and a honey solution topped with crushed banana and Himalayan salt. She called this drink, Tea Monkey. For her master’s preparation, Katerina prepared a beverage made from green tea, mango juice, a mixture of lemon and orange juices, and simple syrup. She then garnished the drink with a pineapple leaf for an “exotic touch.”

In the Tea Tasting category, competitors must demonstrate their tea knowledge by being able to identify beverage samples in two rounds. Round 1 encompasses single tea varieties, and round 2 encompasses multi-component beverages and may include fruit and herbal ingredients. The results of the tea tasting category are judged on the number of correctly guessed teas and ingredients and time.

Jakub Rysavy of the Czech Republic guessed 4 out of 5 samples in the single tea variety round, and 2 out of 3 samples from the multi-component tea round. 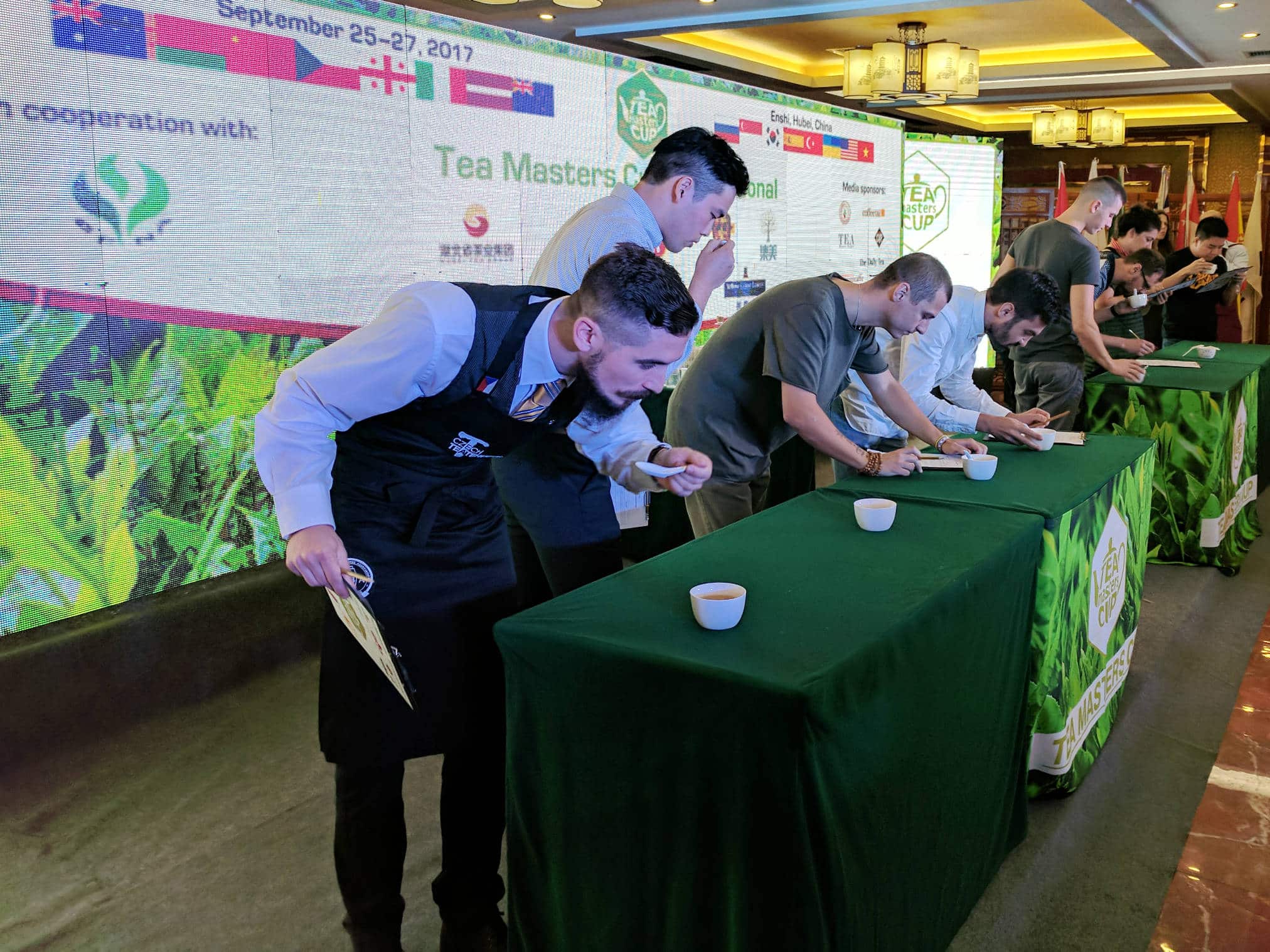 Congratulations to all of the winners, let the 2017-2018 Tea Master Cup Cycle begin!