Hands On: The Teforia Leaf

Hands On: The Teforia Leaf

** Update: Teforia has closed its doors for good. See their website for the full statement. What follows is our original assessment of their second product, the Teforia Leaf.

My first experience with Teforia was a visit to founder, Allen Han’s workshop in 2015 where he showed me a prototype unit. As skeptical as I was, I gave Allen 5 grams of my favorite tea at the time, a Meizhan black tea I had sourced from Fujian Province. I had only been able to get two gaiwan steepings out of a 5 gram serving of this tea. Allen loaded the tea into his unit’s infusion globe, dialed some settings into his iPhone and we sat there as the machine pulled carafe after carafe of tea from the single 5 gram serving of leaves. I was amazed. He was able to quadruple the amount of drinkable tea liquor I was able to get out of the same leaves. The prototype I experienced that day went on to be the Teforia Classic.

Taking a page out of the book of Tesla, Teforia released their higher-end machine first, The $999 Teforia Classic, before releasing a more affordable version this week: the $399 Teforia Leaf. Why the $600 difference between the two machines? The Teforia Classic can infuse any tea you put into it, while the Teforia Leaf requires the use of Teforia’s proprietary pods, called SIPS containers. SIPS is an acronym for “Selective Infusion Profile System.” 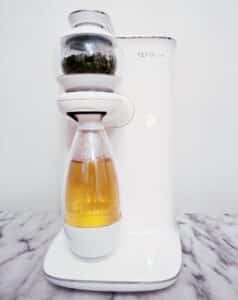 Teforia from the front with an infusion of Shan Lin Xi Oolong. 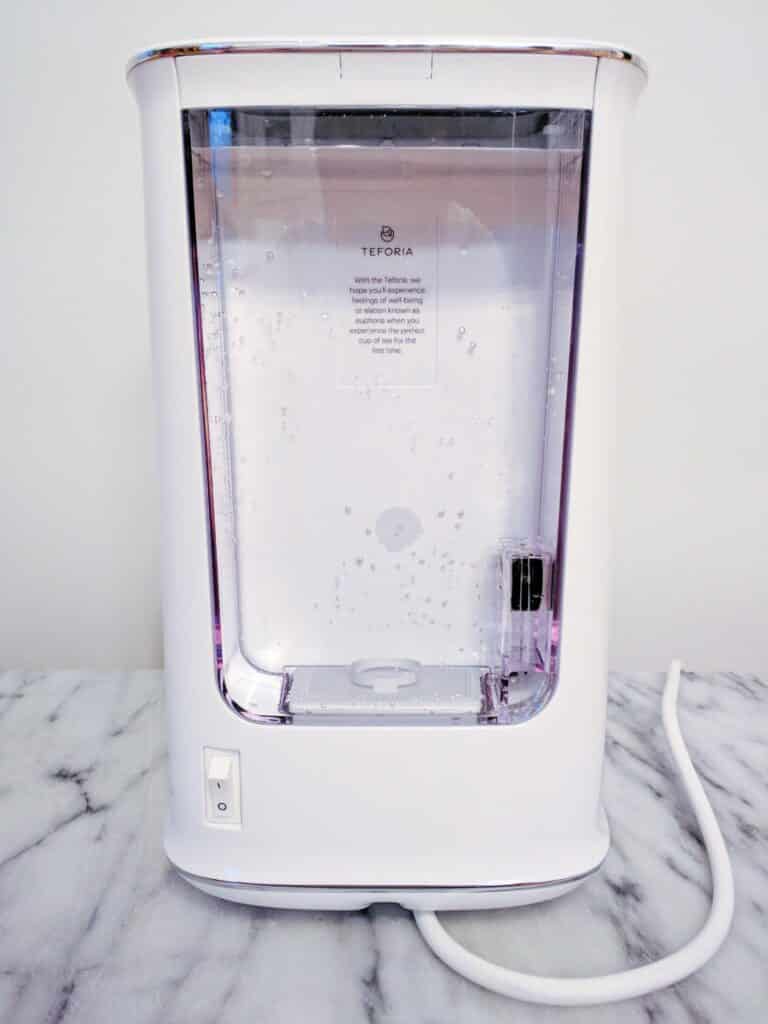 Teforia from the rear, showing the water resevoir.

Each unit ships with the infuser machine itself (seen above), an infusion globe, carafe, water filter, cleaning brush, microfiber cleaning cloth and 15 Sips containers showcasing the variety of tea that can be prepared using the machine. Under the hood, there is some serious technology. The infuser is powered by a dual-core Intel Atom 500mhz CPU and a 32-bit Intel Quark 100mhz microcontroller. As far as connectivity goes, it can handle WIFI, BLE (Bluetooth Low Energy) and NFC (Near Field Communication). It also ships with 1GB RAM. 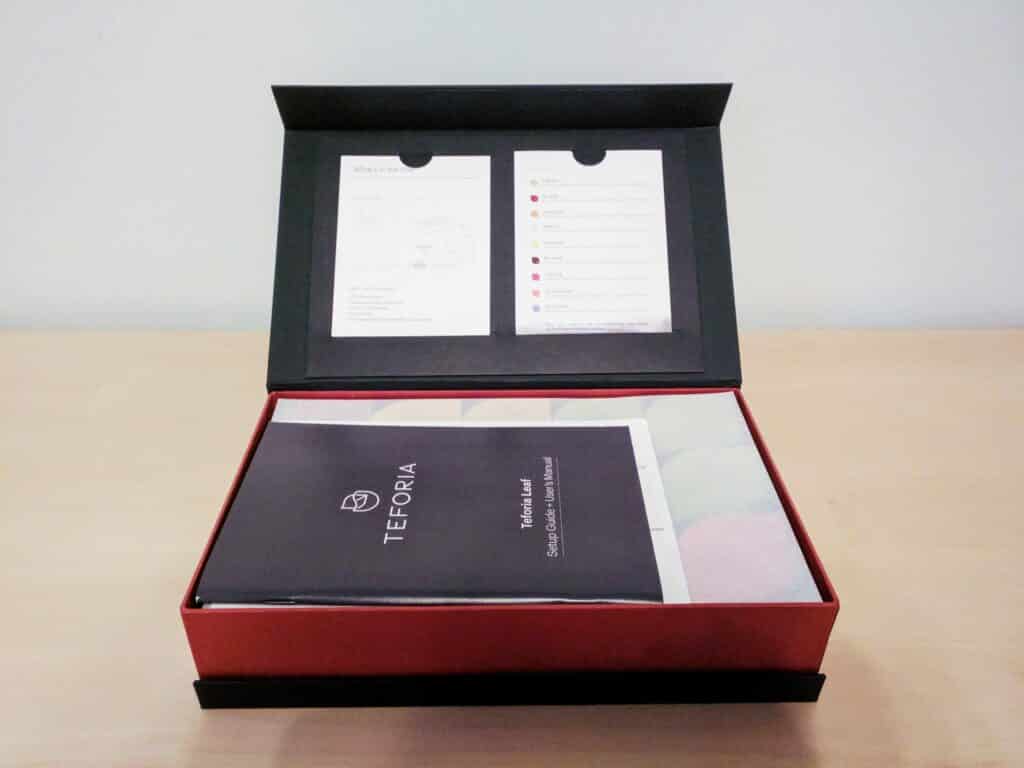 Let’s take a step back for a moment… What Founder Allen Han is going for with his Teforia line of tea infusers, isn’t a “Keurig for Tea.” The Keurig prepares shitty gas station quality coffee, costs a lot of money per-cup, and produces a lot of waste (the company has recently pledged to make their “K-Cups” recyclable by 2020 – 3 more years of waste, yay!). Rather, Han’s creation is meant to replicate gongfu style tea preparation, stacking multiple short, small infusions in the Teforia’s carafe. In fact, he takes it a bit further, introducing aeration and agitation to the brewing cycles allowing for complete granular control over the infusion. 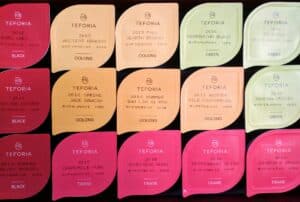 The teas Teforia sells in SIPS containers are high-end specialty teas ranging from $1-5 per container. Each SIPS container contains between 3.5 to 6 grams of tea leaves depending on the tea and each container’s lid contains a unique RFID tag. To prepare the tea, you scan the lid near a Teforia logo on the top of the machine, dump the tea leaves out of the container and into the infusion globe, then press the start indicator (a small blue light at the base of the machine). After a few seconds, the infusion globe fills with hot water, steeps (and a few other things, more on this later) and then the infusion is deposited into the carafe below. This process is repeated 3 times to fill the carafe. The lid of the SIPS container can be scanned multiple times for multiple infusions, and with each successive infusion the steeping parameters change (I’m assuming longer steep time and higher water temperature) and out comes tea that actually tastes good!

I’ll admit, I had my doubts, I’m in the gaiwan camp. A gaiwan is a $5 porcelain “cup with lid” that is arguably the most popular way for tea nerds to prepare specialty Asian teas. It’s hard to beat the control and simplicity of a gaiwan. What I like about the Teforia infuser, is that it was created to mimic the use of a gaiwan, employing multiple, small, short steeps. When asked “what else” happens during the infusion, Allen Han told me that there are 8 variables at play:

There is certainly some agitation and aeration at-play while the tea steeps, but Allen said that what exactly happens inside of the infusion globe is a trade secret. Each tea can be re-steeped as many times as you’d like for 16 hours, after that, the RFID tag in becomes invalid and will not initiate a brew cycle. This also prevents you from using the RFID tags to steep your own teas for weeks on end.

The design of the machine is beautiful, there are no externally visible controls except for the on/off switch on the back of the infuser. All indicator lights and “buttons” appear in icon form from behind the plastic body cover. There is also a Teforia iPhone and Android app, which can be used to control the Teforia Classic. For the Leaf, the app acts as an informational guide for the teas and as an e-commerce shop for the SIPS containers. Because this is an internet-connected device, I asked Han what protections they have implemented regarding IoT (Internet of Things) attacks, he said: “the infuser’s communications are encrypted and it will not respond to pings if the correct authentication token is not present.”

The internet connectivity of the device also allows it to receive updates from time to time, the most recent being a “Caffeine Boost” function that alters the infusion parameters to increase the amount of caffeine extracted from the leaves while still maintaining a balanced taste. The Teforia team has tested this function for each tea they sell and they have seen as high as a 60% increase in caffeine using the function. 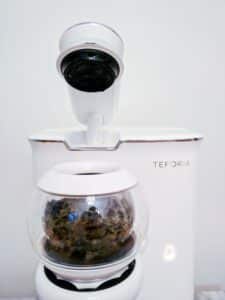 In summary, the Teforia Leaf was a pleasure to use. Everything was well thought out, from the packaging (most components are shipped in micro-suede white bags), to the design of the machine itself, to the machine’s slick features — Han’s career in product design really shines with the Teforia. If you can get past the price tag and are okay purchasing your tea solely through Teforia, this is the perfect machine for you.